But tonight the rain’s pourin’ down on our roof.  As long as the damn thing doesn’t start leaking again, we’ll be just fine!  On January 29, 2012, Vintrowear began its great southernward migration, camping out along the way, enduring privations and hardship, an arduous months long journey to reach the land of milk and honey: Brooklyn.  Take us home, Flat Rate! 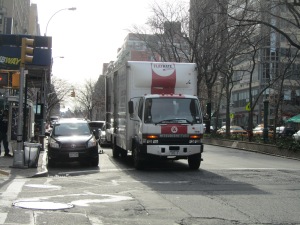 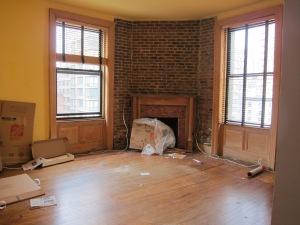 Roughin’ it – Camping out in the Vintrowear offices

No cowboy shirt shalt be inaccessible 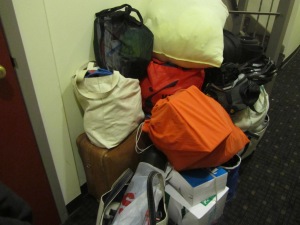 A heartfelt thanks to the many friends who hosted these wayward travelers, who gave us a place to lay our heads during our months of homelessness. We made it here, but we couldn’t have done it without you.  Thank you. 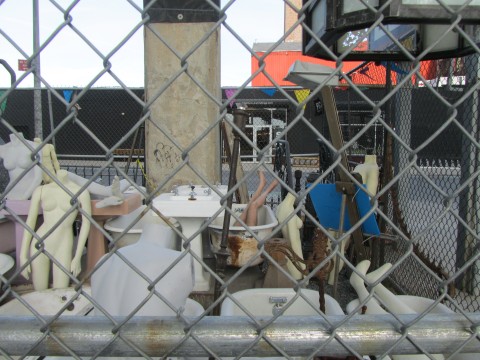 We had the good fortune this week to catch the opening night performance of Arthur Miller’s American Clock at the ﻿Brooklyn Lyceum, performed by the Brave New World Repertory Theatre and directed by our dear friend Cynthia Babak.

Alternately upbeat and bittersweet, Miller’s ode to the optimism and naiveté of the American spirit warns that the clock is ticking on the American Dream. The 53 characters—ranging from a middle-class Brooklyn family to train-riding hobos and high-riding Wall Street brokers brought low, [were] played by 20 actors and musicians who tell the poignant story of an economic crisis Americans believed could never again happen.

All in all, a very timely and cautionary tale.

From economic ruin to the gentrification of Meg and Dan, we went to three open houses this morning, a first, I think, for the both of us.  Since we’re not exactly high-riding Wall Street fatcats, but we do have the American Dream of owning our own home, and continuing the week’s Brooklyn theme (or meme, or trope, if you will) we checked out Bed-Stuy.  Let me preface by saying I know nothing about Brooklyn, but I had heard that Bed-Stuy is somewhat “up-and-coming” in a euphemistic way.  Granted, we were there on a sunny Saturday morning, but it seemed fairly neighborhoody, and there were no outward signs of roving bands of youth, although I imagine they might appear after dark.  But the block was clean, and the brownstones were cool, and flower boxes were in many a window.  I cannot imagine what we would do with 5,000 square feet!  I am scrambling to clear, literally, 5 square inches in the Vintrowear Operations Center.  Imagine all that space.  We would need to buy more furniture.  The first two floors need some, well, floors.  And also a bathroom (with a toilet, which this parlor floor was currently sans.)  But the top two floors were in charming and stunning stain glass sunny condition.  Granted, we wouldn’t be able to rent them out due to some legal mumbo jumbo, but we could live in them while we installed some basic comforts in the ground floors.  I refuse to post anymore pictures, and I am not telling anyone where this house is!  I do not want anyone to snap it up!  I am in love with this house, and I am considering it the official Vintrowear World Headquarters, and no one else can have it.  Here’s a picture of what the parlor floor bathroom looks like, maybe it will discourage you people:

The second house we looked at, about 3 blocks away, was on street that immediately made me wrinkle my nose and make a frowny-face.  It was strewn with trash.  The owner was showing it, and had obviously put a lot of work into the renovations, but despite the fact that it had floors and plumbing, it was somewhat charmless and sort of gave me the heeby jeebies.  We both voted thumbs down.

The third house, knock me down with a feather, I am simply astonished that a gem of a museum of a house just exists out there in this city and not as a, you know, museum.

Tastefully decorated with period furniture and Hummel figurines which merely highlighted not detracted from the built-in carved wood cabinets, and talk about space, our entire apartment could have fit in the kitchen.  It was approximately the size of the Colliseum.  It was massive.  It was $1.1 million.  It had both floors and plumbing.

Following the museum-house, we got an excellent initiation into the woes of Brooklyn subway suffering, as we waited and waited and waited for our train, making us 20 minutes! late for our reservation at Balthazar for Nancy’s birthday luncheon.  Erg, how I hate being late.  But soon the champagne was flowing, the burger was tasty, and the waiter was tres French not to mention tres handsome.  Speaking of Nancy, I think I have picked my Vintrowear logo.  Wait til you see it.  It is a work of art.  It says everything I want it to say.  It’s going to look fabulous above the door to the V.O.C.

I’m off to Whole Foods to recycle some yogurt cups and some books.  (Gasp, I have finally resigned myself to selling off my knitting books, and I think another big pile is going into the WF book bin.  I will have then gained myself another 3.5 square inches of space.)

You are currently browsing entries tagged with Brooklyn at Vintrowear.